Hey, everyone. TJ, here with my very first chaos article! I’m here today to talk about the current state of chaos and what I believe are the current strengths and weaknesses of the faction. So let’s jump right in.

Tons of book support– We have multiple codices and supplements to pull resources together to make a list.

Synergy galore– Chaos is such a strong faction because of the shared keywords and god allegiances you can have. These options create some super strong combos as well as stratagems that work across detachments.

Different ways to play– Unlike some of the other factions that are doing well in the current meta, chaos has no build that is clearly the best. This gives people options on the type of list they want to have.

Blood for the Blood God– Nobody does it better than chaos in a melee setting. We have some of the most intimidating melee units in the game from multiple sources, and when you couple that with the synergies, it makes for some very devastating combos.

Psychic Mastery- Decades of aligning with the dark gods has taught us some of the best spells in the game. These can not only strengthen units but decrease the effectiveness of your enemies.

A tool for every occasion– Chaos is one of the only armies that can use summoning to bring what is needed for every match. This modifies your list to take on armies that linear lists might struggle with. 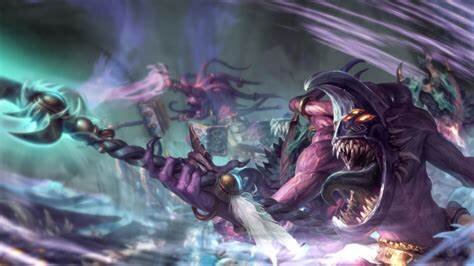 Overpower Creep– Unfortunately for chaos in the dying embers of 7th edition, Chaos, as a faction, was a god amongst men. It had some of the craziest combos that almost broke the game. GW and the design team have not forgotten about this. Some of the best units of that edition have been stripped of power to a laughable level (lookingat you, Kairos!).

GW Giveth GW Taketh– The rules design team in 8th edition has given chaos some of the best combos only to have them taken back over the sheer power they wrought upon the game state (Poxwalker spam only to name one).

Where to put this?– The single most frustrating part about building a list for chaos is where to put a unit so that you get its benefit in the army but not have it losing you the detachment bonus. Many a list has been scraped personally by me for this exact reason:

24 inches… Do you want an entire faction that can only operate at 24 inches? Of course you don’t, but that’s what you get when you worship the dark gods.

Bad units that you need- Starting with some of the best troops in all of the factions, chaos had its pick with multiple units that fit that bill. With a mix of super cheap and super synergistic units, we were sitting pretty. Unfortunately, the Nerf bat hit us where it hurts, curb-stomping most of the functional units and leaving us with the dregs of their former glory. Chaos troops have been in almost every Chapter Approved negatively, with some units nerfed twice before finally stopping the beatdown. Troops are a necessary tax to get the CP’s we want, and we definitely like CP.

Putting it all together

Now that we have identified what the strengths and weaknesses are, we can now structure a list idea out to begin with. To utilize the detachments bonuses of our faction, we would like to keep our detachments as pure as possible. That way, you can get as many stratagems and extra army-wide bonuses we can. A robust psychic core would benefit us. This way, we can cast powers that supplement our army as well as dealing damage and de-buffing our opponents as much as possible. Next, we want to be able to add that destructive force of melee to our army construction as well. Intense melee will not only keep the focus on your opponent’s side of the map but allow you to control the state of the battlefield. Last but certainly not least, every good chaos needs god allegiance focus. They will enable us to chain multiple stratagems, powers, and demon specific bonuses to give our army an overall buff. Even if the whole army is utilizing multiple marks of chaos, it should be able to buff most of the army. This synergy gives us a broad stroke for developing a potent force for chaos. In my next article, I will cover the current lists that I believe are the power builds for this faction. Stay Tuned for more, and don’t forget: