We are live in the War Room with: Necron TOP UNIT Tier List!
LIVE

Hey guys, Erik here with a detailed breakdown on Genestealer Cults! In this article I will walk you all through: their strengths and weaknesses, their place in the meta, and some plans for moving forward with this incredible faction in the future.

Let’s start off with talking about some of the many strengths you have when playing GSC. Genestealer Cult in my opinion is an army with a very high skill ceiling, they have a crazy amount of over lapping rules and buffs that greatly impact how you can use your units on the table top and this takes quite a lot of time and thinking to really wrap your head around just how to put it all to proper use. 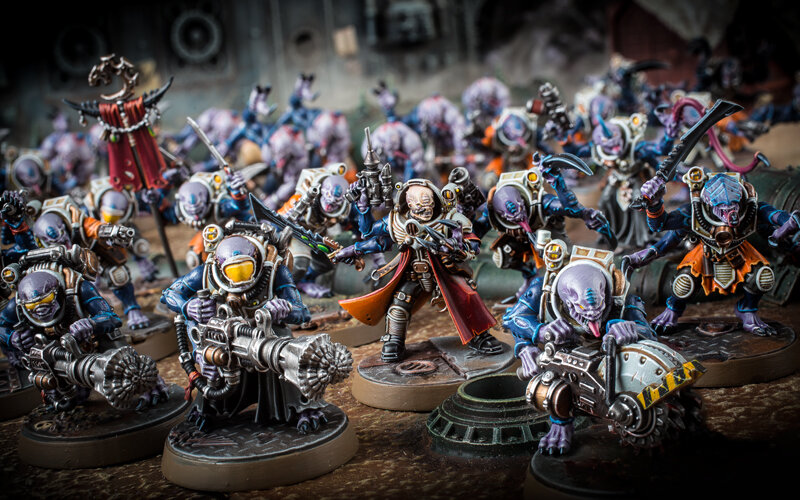 Some of the key weaknesses or problematic situations you have to watch out for as a Genestealer Cults player are specific units that prevent deep strikes and abilities/strategems that allow the enemy to intercept you. Even effective screening that strong players use by creating multiple well spaced layers can be challenging to overcome.

The main issue I have personally found with GSC is their lack of ability to play an attrition war against their opponents. Often you find yourself trading big expensive combat bomb units for units that generally have little value which isn’t sustainable at all. Even if you are able to trade for one key target you have probably traded that bomb + supporting characters + command points for one high value target, this can quite easily mean the difference towards the end of the game when you are trying to scrape together the remnants of your army to hold on for the win.

This issue has lead to what I believe to be the solution for GSC and the way forward. My theory on GSC for the future is to head down an MSU (multiple small unit) road. I don’t mean just 5 man units of acolytes with nothing or 10 man brood brother spam, I’m talking 5-10 man acolyte units with 2-4 rocksaws in each unit. This removes the concern of trading a whole ~20 man acolyte unit just to escort four rocksaws into combat. It also alleviates the pressure of trying to keep a larger unit alive through wrapping units in combat, which simply doesn’t work as well these days. It also allows you to overload your opponent with threats, and it spreads your rocksaws throughout the army instead of having all your eggs in one basket. You can also make majority of the army quite reliable in getting into combat by making a brigade a broodsurge detachment. This gives all your small rocksaw units 7″ rerollable charges on the drop as well as one of your 10 man units using perfect ambush.

Another bonus to running GSC in this way is it allows you to be very flexible with your deployment and deepstrike ratios and what you may decide on what you want to start on and off the table instead of being locked into having to make sure your big units of accolytes are starting in reserve. Using strategems like “return to the shadows” late game to stagger the deployment of small rocksaw units will really keep your opponent on his toes in the late game.

Just remember my Xenos friends…. The Imperium is weak.