An ancient proverb in 40k is that games are won and lost in the movement phase. By and large, this is 100% true. The assault phase can be one of the most devastating tools at your disposal, not just because it allows you to deal damage to your opponent, but because it’s also an opportunity to move your units multiple times! Today, I’m going to teach you about how to best use your fight phase as a mechanism for additional movement!

Here we have a unit of orange Horrors screening the unit of Pink Horrors sitting on the objective. This formation is to ensure that the Grey Knights can’t run in there and contest it. Let’s assume for this demonstration that the Grey Knights have the objective secured rule, but the horrors don’t because of the way that their detachments are set up.

As we enter the charge phase, the Grey Knights rolled the 7 average on 2d6. I even busted out the handy dandy tape measure to show you exactly how far 7″ can get you, nowhere near close enough to get to within 3″ of the objective. However, you’re a good player, and you’ve been keeping up with your Art of War classes in the War Room, so you understand that after killing the orange horrors, the Grey Knights will be able to pile in 3″ further to potentially get within 3″ of the objective!

Well, not quite! As an avid follower of the Art of War, you know you should premeasure everything. So, before moving your models, you bust out your handy dandy tape measure and find your Grey Knights are further than 13″ away from the objective. That means your 7″ charge + your 3″ consolidation at the end of your fight + the 3″ radius from the objective for capturing it (13″ total) won’t be enough to get you into range. Sad times indeed.

Fret not, humble Grey Knight player, for all is not lost. There are some sneaky moves you can employ here to get within range of the objective!

Shown below is where I positioned the Grey Knights after moving their initial charge move. I was very deliberate to keep them reasonably far from the orange Horrors on their initial charge move, allowing me to still pile in during my fight phase. Note: had I based the Horrors with some of my Grey Knights, I would not be able to pile in with those models because, to pile in, you must move your model closer to closest enemy model, and if you are base to base, you can never actually get closer. 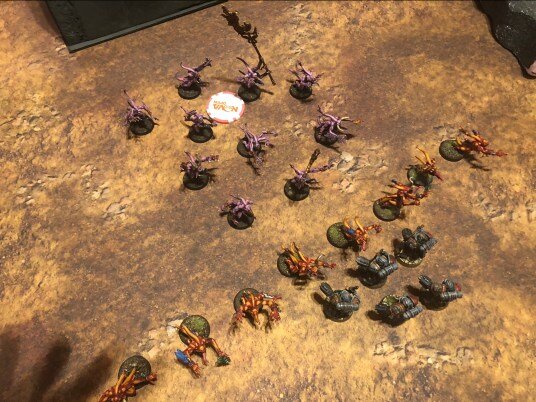 The image below shows how I did my initial pile in with my Grey Knights. I walked right passed the orange Horrors that were standing right in front of me. I made sure to finish .99999″ away from them, thus ensuring the pile in was legal, as I finished “closer” than when I started.

A cool thing happened here, though! My two most forward Grey Knights are now closest to the pink Horror standing right in front of them (roughly .5″ away). This maneuver will become relevant the next time they attempt to pile in (their consolidation move). A consolidation move and a pile in move follow the same basic rule of ending closer than you started to the nearest enemy model.

Well, the unthinkable happened. Fateweaver pulled off some of his sneaky daemon tricks, and the orange Horrors escaped from the flurry of Grey Knight attacks unscathed! 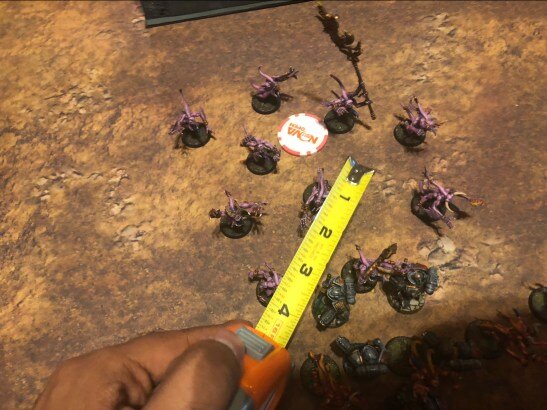 And ring-around-the-Horror we go! The Grey Knight uses his final consolidation to walk right by the Horror standing in front of him (ending closer to it than from where he started), and well within range of the objective!

Below is the final shot of how the Grey Knight charge went. Even though nothing died, the Grey Knights won the battle by capturing the “defended” objective! Now, some of you nay-sayer may want to jump on me and yell about how the Horrors are also objective secured, so the Grey Knights haven’t taken the objective. However, in this example, the Horrors were summoned and, therefore, don’t have ob sec. Also, the point of the matter and validity of the tactics specific to the model placement and consolidations still stand. 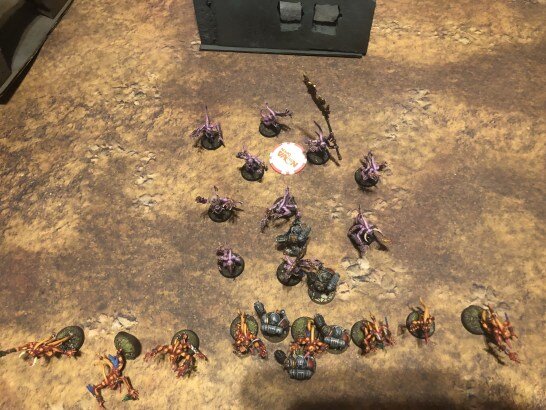 Frequently, you’ll hear me run around preaching that assault is more potent than shooting, and this is precisely why. Assault and shooting are both mechanisms for dealing damage to your opponent, but assault can also function as a second or even third movement phase! It’s more subtle, and once you start seeing situations as pictured at the top and visualize the step-by-step process of how you can transform it to the picture at the bottom, you’ll begin to see why the highest caliber 40k players respect assault so much.

So go out there, play some games, and try to see how you can shift the emphasis of your tactics and strategies from killing to winning!