Listen up, recruits! John Lennon here, ready to teach you about the Imperial Guard. In a universe full of transhuman legions, ancient gods, and unimaginable horrors, it is easy (and perhaps forgivable) to overlook the humble infantryman. Despite their regression in the Space Marine meta, the Imperial Guard got a healthy buff in their Psychic Awakening and are posed for a strong resurgence. You’ve read Guard tactica before, but this time you’re going to need more than 32 models. You can learn about the best-allied battalion in the Imperium, but I am focusing on Guard forming a significant portion of your army here. Ready to dive in?

Let’s start by analyzing what Guard brings to the table. In the giant, steamy pot of soup that is the Imperium, there will be redundancies and interchangeable units, but each faction does have some things they do better than the rest. Guard brings cheap troops and HQs to fill battalions, and their troops are very mobile. Scions can deep strike to deny kills early and provide screens against enemy reserves, or they can deal accurate damage on the drop. The humble infantryman can use orders to grab objectives on turn 1, pushing out for bonus points in ITC format, or just provide additional cheap screening. They can also hide to avoid early game firepower and then get back into position quickly with a minimum of 14″ of movement as an officer gently encourages your infantry to move.

True to their lore, Guard also provides some incredibly excellent tanks. The Leman Russ chassis has evolved into a weapon finally worth acknowledging! Negatives to hit are fading out of the meta and becoming less popular, and good old fashioned Guard firepower is back in a big way. If you want to bring Guard tanks, you must decide how exactly you would like to run over your opponent. Would you rather your opponent be unable to hit you, or strike them so hard that they can’t hit back at all?

Guard brings cheap tanks with lots of firepower. Do you want to blow your opponent’s warmachines apart by simply having more guns? Or do you want your opponent to be worn down by multiple turns of barrages, as he struggles to get to grips with your forces? Guard has a wealth of indirect fire options, and they have the absolute magnificence that is the Tallarn tank commander. New to Tallarn? Let me enlighten you. Tallarn naturally ignores heavy penalties and comes with a tank order to let a Leman Russ move 6″ before or after it shoots. This means you can propel a tank forward into range, or use it to hide yourself after firing into the enemy. With a few Tank Commanders and several artillery pieces, you end up with a very healthy amount of firepower that is hard to engage with traditional shooting. While you still can’t target your opponent’s Chaplain Dreadnaughts, they will struggle to draw a bead on your firepower as you blow the rest of their army to pieces.

As a general rule, this approach is best when you have less firepower. You can only hide so many units from the angles created by a mobile army, and there will only be so many terrain features large enough to hide a vehicle. At a certain point, your opponent will be able to shoot at your tanks anyway, so you may as well have more than your opponent can handle. Besides, direct fire weapons are typically the most powerful. While Tank Commanders are rightfully seen as the pinnacle of Imperial tankcraft, the generic Russ is quite the bargain. A Leman Russ Demolisher checks in at a paltry 135 points, which is a steal for a tank that puts out 2d6 shots a turn with d6 damage and ap that will make a Centurion blush. 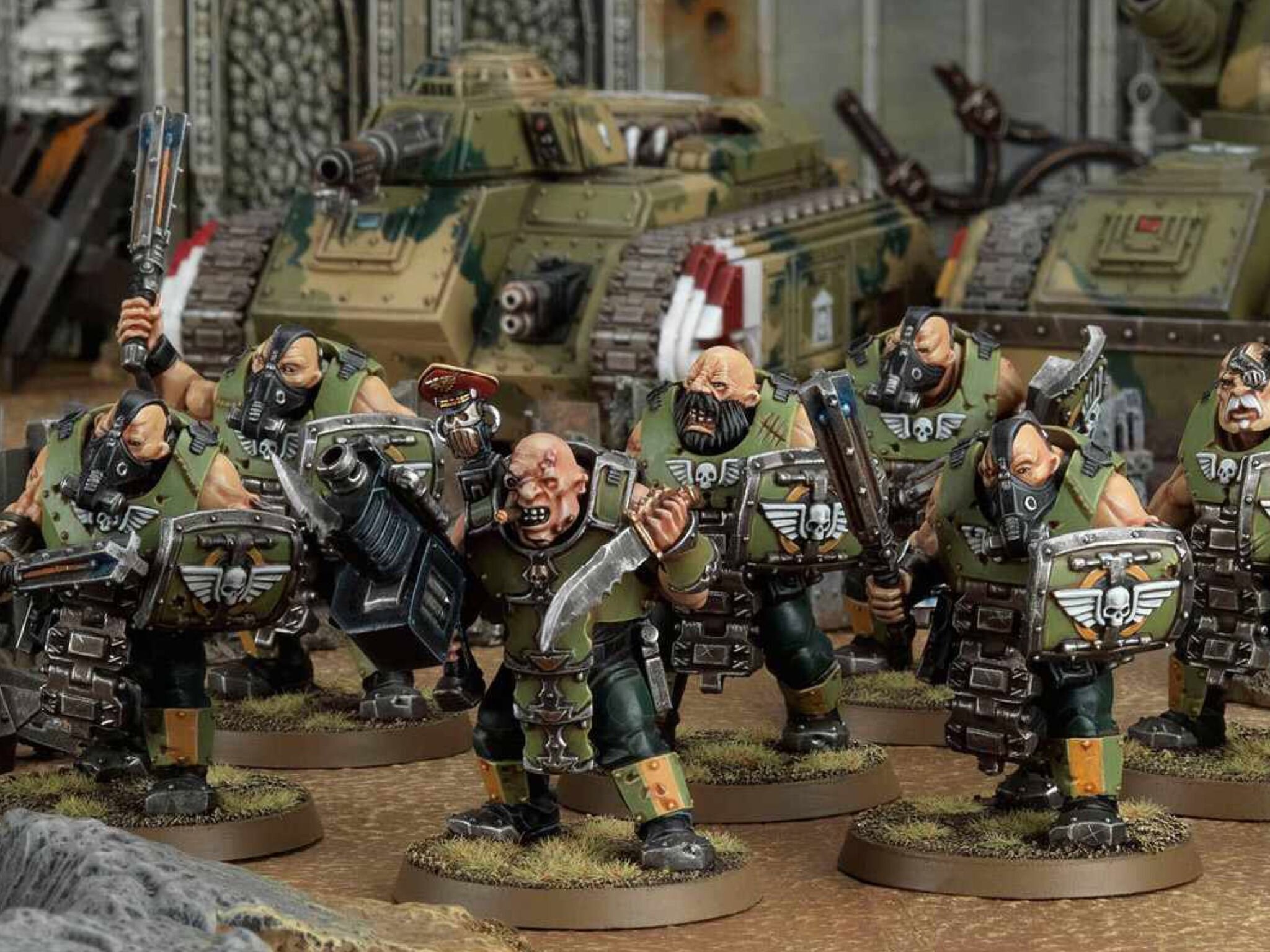 If you’re going to move away from Tallarn, you should explore some of the custom regiments that introduced in the Greater Good. My personal favorite is the combination of Gunnery Experts and Spotter Details. Adding 6″ to the range of heavy weapons means that all of the 24-36″ range weapons that previously have been eschewed become that much stronger. Demolisher cannons, Punishers, and plasma weapons are the obvious benefactors, and most of these weapons will appreciate being able to reroll their shot count. This is built for raw damage output, but you can use other custom regiments such as Jury-rigged Repairs to keep your tanks fighting longer.

Probably the greatest increase in power level for the Imperial Guard came in the form of their Tank Ace rules. While Guard are traditionally seen as a static and inflexible army, they now have some of the most flexible pregame options in Warhammer. Essentially, you can replace one warlord trait with a Tank Ace and buy another. Depending on your opponent, you can increase the ap of your weapons, buy a better armor save, or reduce incoming damage by one. While this has obvious inherent value, it also makes your opponent’s life more difficult when they prioritize targets. If two Tank Commanders are -1 damage, and you have three more Demolisher Russ in front, what should they target? The Commanders deal more damage but are far harder to kill. Is it better to target the lesser Russ to have better odds of a kill point and reduce incoming damage, or to go for a bigger fish and risk not taking out any of your tanks at all? The more decisions you force an opponent to make, the more likely they are to get one wrong.

I briefly mentioned Scions above, but they deserve a little more attention. Scions received a stealthy points drop in Chapter Approved before their regiment rules made a rapid insertion into the meta. They’re a very cheap troops choice that can deep strike to avoid giving up kills, and they deliver precious BS 3+ firepower into range consistently. While it is tempting to stock up on plasma or melta and take advantage of their mobility and ballistic skill, there is a lot of merit to simply adding more hot shot lasguns. The Lambdan Lions are probably the best for delivering special weapons such as Plasma, as they can combine a relic and order for rerolls of 1s to hit and wound, and have an increased ap inherently. But, every good footsoldier knows that weight of fire solves all problems. Iotan Dragons provide a humble range buff that brings a deep striking hot shot lasgun into rapid fire range, which literally doubles their damage output without having to invest a single point in weapons upgrades. At only 70 points, ten Dragons can put out 37 ap -2 shots. Do you want to trade positively into Intercessors? Spend one command point on Point-Blank Efficiency, and your S4 rifles will actually do more damage to the classic Iron Hand Intercessor than their weight in plasma! Scions provide a wealth of tools for a cunning commander, and probably deserve their own article in the future. Suffice to say, you can use them to make your opponent respect the need to screen the potential for anti-tank firepower to appear on any flank. Often, enforcing the need to screen means that your opponent will provide targets to your direct fire guns. There are quite a few viable regiments to choose from, depending on your list’s needs!

There is one final reason that I believe the humble Imperial Guard is primed for a competitive resurgence. The new ITC missions promote a much more central conflict, which opens up the doors for shorter ranged weapons to be more useful. Additionally, the humble Guardsman is one of the fastest troops in the Imperium and can be used for fast recon pushes or to grab bonus objectives that are easier than ever. But, you can also screen out the center quickly and prevent your opponent from getting to the centerboard where so many points can be earned. In the classic style of the Imperium, victories are won over the bodies of martyrs with the thunder of guns!

While it’s easy to get caught up in the adrenaline rush of an armored column, it would be foolish to play an army without being aware of its weaknesses. Guard are traditionally short on melee power, and what they do bring is usually lacking in ap, which means that it is less useful in a marine meta. Guard also are an almost entirely ground-based army, meaning that their shooting is allergic to being touched. Very often, you will see a pure guard list be utterly wrecked by a fast melee unit like Genestealers or Shining Spears that hops around from combat to combat, eviscerating everything in reach and tagging your precious vehicles while the rest of the army barrels towards you. Flying screens, good counterpunch, or both are probably required to make a purely TAC (Take All Comers) guard list. It’s certainly easy to put a supreme command detachment of this month’s Space Marines in, but for my money, I like adding a Sisters of Battle outrider full of Seraphim, as they provide a fast and durable flying screen with respectable melee output. Plus, it keeps to the theme of unmodified humans holding the line against the terrors of the galaxy. If you want to take a pure guard list, Bulgryn are a popular counterpunch unit, and you can increase your body count to ensure your opponent struggles to reach the tank line. I think we’ve talked enough theory, so let’s put a list on paper!

What am I doing here? I have enough firepower to make a Tau commander blush and enough deep striking bodies to make anyone think twice about hiding in the corners. With Tank Aces, I can make both plasma tanks -1 damage, so they become a much less appealing target than the Demolishers, and one battle cannon Tank Commander is perfect for exploiting range to stay safe and can take the Hammer of Sunderance for flat 3 damage. Anyone who tries to silence the deadly commanders will be ignoring three Demolishers that push upfield with their reliable number of shots and longer range, meaning they can all double tap at a threat range of 35″ without spending any command points. If I need to screen against wrapping enemies, Seraphim are a very durable flying screen that can be sneakily good in combat when required, but also provide fierce anti-infantry shooting with buried melta weaponry.

The Imperial Guard is a rewarding faction to the clever general, but will still require a practiced hand to get the most out of them. Want more lists, or to see some of these armies used on the table? Check out the Art of War War Room, where you can interact with the coaches and watch our weekly clinics! Also, make sure to check out the Art of War Twitch Channel! Follow your orders, trust in the Emperor, and keep your bayonet sharp!