Greetings, dear readers! Today we take a pilgrimage to a new edition, where your faith in the Emperor shall be rewarded! John Lennon here, ready to talk to you about my new favorite army in 40k, the Sisters of Battle. The most recent codex from 8th has made a relatively smooth transition into 9th, no thanks to Psychic Awakening. I’m here to talk to you about how the Sororitas will transition into new 40k, how they fared in Chapter Approved, and how best to adapt your army. 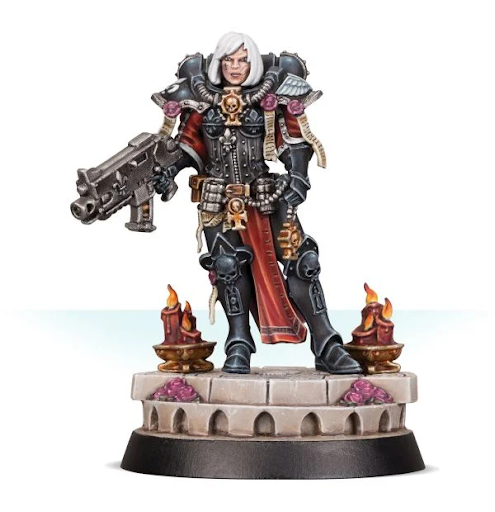 As the last book of 8th, Sisters feel designed for the new edition. The most obvious way is in the missions, where Sisters excel. The new eternal war missions, found in the Chapter Approved Mission pack, truly favor an army that can get into the middle of the table and score objectives. Seizing those objectives and holding them through your opponent’s turn will earn you primary points. Let’s start by defining the identity of Sisters as an army, and how it will benefit them.

Sisters are a relatively durable army, with their low toughness offset by strong invulnerables, miracle dice, and mechanics to ignore the AP of incoming weapons. They’re a moderate shooting army that is best at short distances. They can bring a powerful array of special weapons to bear and can take an impressive number of models without including massive units. They also function best when supported by several characters who rely on powerful auras, meaning that the various units in your army will work best when near a cluster of characters who significantly increase their potential. All of these factors combine to give Sisters an identity as a cohesive force that wants to push up the table methodically and reach the battlefield’s center.

Lucky for you, this is exactly what 9th edition demands of us. Reach the center, and don’t be killed in the process. Resist your opponent’s best efforts to remove you. If your enemy gets there first, be ready to purge them with holy bolt and flame. While sisters are very methodical, they are not fast as an army. You have situational speed, where one unit can advance and charge. You can use miracle dice to get full effect from your units, but they are also not dashing 44″ to touch any point on the table. Sisters need to make the middle of the field, but rarely have to go farther to win the game. Some things are easier to show than tell, so I’m going to lay out a list that I believe has all of the components needed to navigate our new reality successfully. 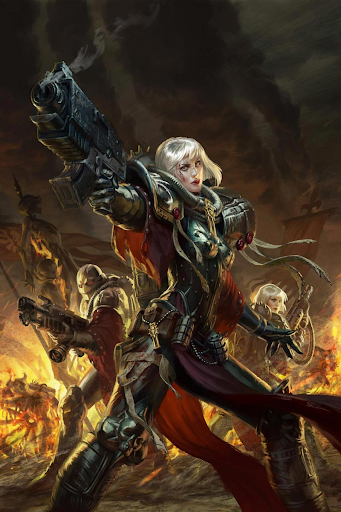 I envision the Adeptas Sororitas playing the mission in a simple way. Get upfield, get on objectives, and present your opponent with a simple problem. If they do nothing, you will outscore them on the mission and win the game. But how to respond? Your opponent can hit you and try to do enough damage to win, but they are faced with a very simple reality. Whatever you do back, as a sister’s player, is going to work to full effect. They can’t take the risk that you will fail a charge, or fail to do enough damage. If they charge in a vulnerable character, that meltagun will hit and wound on overwatch. If you can make a charge, you will. Miracle Dice are the core special rule of the nuns with guns, and it presents nothing short of sheer terror for the opponent when they realize that they are never safe. Move a tank up to shoot your objective holders, and the meltaguns *will* roll a 6 to advance and get in range to shoot. Get on the objective successfully, and the Repentia in the Rhino *will* make their charge out of the Rhino. Leave the flanks exposed, and they *will* make a charge from reserves. Screen too lightly and the Seraphim will clear the screens for the Repentia to outflank in a better position. Sisters are not a gambler’s army, because you can always expect what they will give you. But to face them on the table is to speculate at all of the things they could do and know that none of it is a risk.

The list I have written above takes advantage of several of the points adjustments that have been made. Seraphim went up without being prohibitively expensive, and so I have cut down to only a single squad. Presenting possibilities is a vital part of the Sororitas strategy, and one unit is enough to make your opponent consider the damage they can inflict. But, meltaguns and combi meltas have gotten cheaper, and so I have mixed them amongst my units. While the Exorcist is a great tank, it does not naturally want to advance upfield with my core, and I do not want to leave any characters behind to support it. While Exorcists can advance forwards without suffering a heavy penalty now, I would just rather have more bodies with meltaguns. Instead, the cheaper meltaguns help offset the 2 point increase that most walking sisters took and leave the army feeling like it has a variety of threats. No unit here can be ignored, but no one unit is so essential that its absence will cripple your plan. Dominions provide an added element of board control, as their scout move means you can reach objectives turn one without advancing. This makes it easier to engage the enemy if they are close or to perform an action if the mission requires it. Imagine a scenario where you raise multiple banners turn one, and the only way to stop them from scoring is for your opponent to push directly into both the shooting and charge range of your entire army! In doing so, they might even give you extra movement. This certainly isn’t an ideal scenario, and Sisters are best when forcing your opponent into tough choices that you know you will be able to exploit. 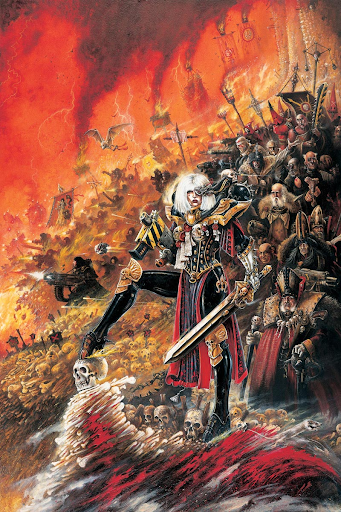 In keeping with that idea, it pays not to be overconfident with Sisters. Forcing your opponent into mistakes is all well and good, but you will need to have models alive to retaliate efficiently. One of the traps I fell into during my earliest explorations was to consider myself too durable and to invite unnecessary damage to my army that I didn’t need to risk. Let’s make a couple of things clear: Sisters are only t3, and you will take more saves than the Space Marines did that you were playing last season. The difference between toughness three and four can’t be understated, and you will feel it when you get on the table. Miracle dice allow you to pass a few saves, but become less valuable as you take more and more saves. You can only pass a finite amount, and beyond that, you will have to count on the luck of the dice. While Sisters are durable enough to take a given turn of shooting, it is still foolish to plant yourself in front of the enemy’s guns and expect not to take casualties. Usually, your shooting is less potent than the enemies, just more reliable. If the option presents itself to hide your more powerful units in midfield terrain, I recommend taking it every time. Protect your characters, hug terrain and objectives, and your opponent will be forced to close the distance in order to interact with you. This, at its core, is why I prefer Bloody Rose to any of the other Orders. As a short-ranged shooting army, Sisters will inevitably get into charge range, and Bloody Rose provides an incredible buff in that aspect. Every unit becomes a threat, and your characters suddenly become credible combat threats that can mince Primaris with my favorite relic, Beneficence. If you take the center with units in reserve, your opponent will have to wrest control while protecting every corner of the battlefield, and this can often prove insurmountable. Sisters Repentia in a Rhino provide a solid 27″ of threat range while one layer of screens will not save your opponents backfield from the squad in strategic reserves if your Seraphim land and do work.

I haven’t spent much time talking about the actual characters who provide the buffs. Fundamentally, these have not changed at all. Celestine and a warlord can give your girls a 4++, while the Triumph is a wonderful miracle dice factory that can benefit from the new obscuring terrain thanks to a timely FAQ! As a matter of fact, you’re going to generate so many miracle dice that I have taken to buying Simulacrums on my melta squads, all the better to utilize the rewards of faith that Miracle Dice bring. This list is contorted to fit into a single battalion. As a pure Sisters list, it will start with full command points before your pregame stratagems, with a bonus Inquisitor added. Draxus is there for one simple reason: to counter the hardest counters to your army. The worst matchup for Sisters may be our new Death Guard overlords, as the Foul Blightspawn alone neutralizes the possibility of initiating combat with a big hitter like Repentia, and they will naturally want to get into the center to contest your objectives. Draxus and her paralysis grenades open up the possibility of striking first. At the same time, she can use her psychic prowess to deny overwatch, block an enemy spell, or achieve the Psychic Ritual secondary for you. While it’s always good to abhor the witch, at least this one is on our side! 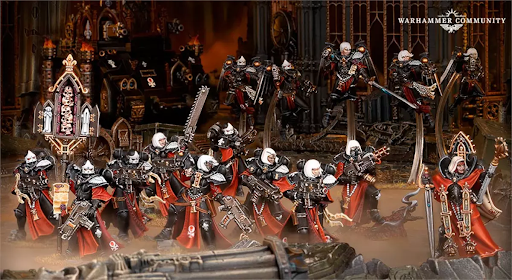 That’s all for now, folks! I hope you enjoyed my thoughts and ramblings on the Sisters of Battle. Right now, this is the most exciting army in the game for me, and I look forward to exploring the many options they provide! If you enjoyed this, be sure to look out for our games on twitch, or in the Art of War War Room!