Hi everyone, my name is Camden Jansen, and I love playing Chaos Daemons and assault armies in general. I took a Magnus and Mortarion list to a 5-1 record at LVO during the Knight Castellan and Ynarri meta (a sorrowful time in 8th edition for anyone not playing those particular factions), and I have a number of thoughts and tactics that I feel might be taking a look at in 9th edition. Now, without full point changes, it is impossible to determine if any unit is good or bad. Still, we can at least see which army features are better or worse from a core rules perspective and maybe try to string together some introductory strategies to test when 9th finally fully drops. So, let’s get started with some The Good, The Bad, and the Ugly of 9th ed for daemons.

I want to say that things may look a little dire at first glance, but I think it isn’t ENTIRELY doom and gloom for daemons. 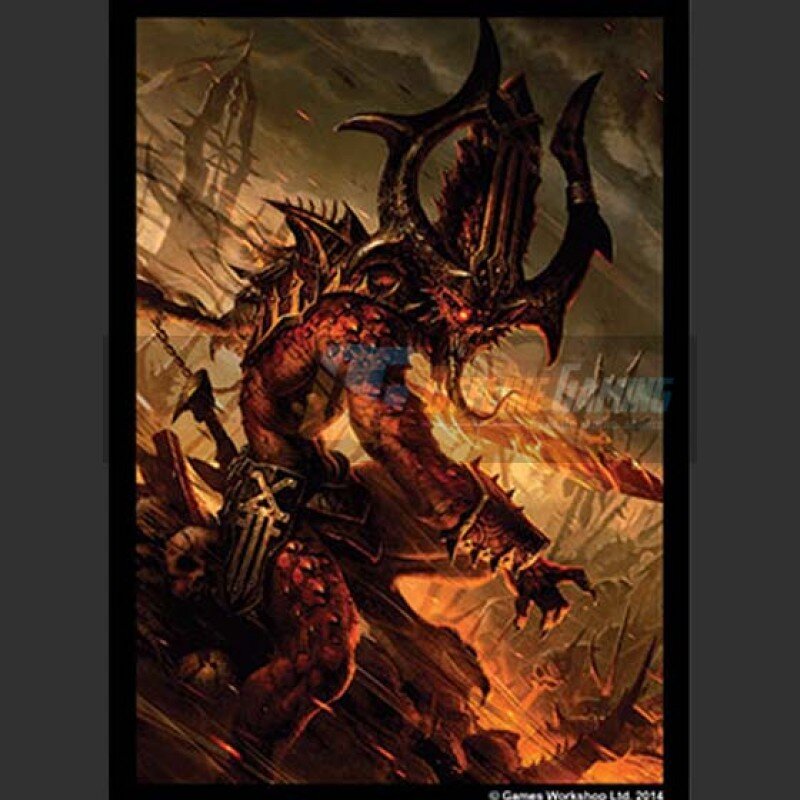 First off, daemon armies have historically not had a lot of cp to spend, and this is because we want big troop hordes of 30 models. Thus, daemons have a lot of trouble filling up troop slots unless you take Nurglings. Additionally, even our cheap HQs are extremely expensive for what you get. This left daemon armies either constantly hurting for CP or taking many extra expensive characters for little impact. Taking 30 man hordes and still filling out the detachment requirements is a huge boon, especially for mono-god armies. You can now take 90 Bloodletters and put them in deep strike with three Banners of Blood without even totally running out of CP.

Second, other than the GUO (RIP big daddy), all of our greater daemons are under that 18 wound cap for obscuring terrain. This means that even a Wrath of Khorne Bloodthirster with his hilariously big hammer whip has a chance to hide from the seemingly oppressive firepower being sent his way. This is a considerable improvement over the current ITC line of sight mechanics designed around only protecting smaller infantry. This could allow for some plays where you hide these big monsters ~16” away from objectives and dare your opponent to send something forward to take it. You then spring them out of hiding and blast whatever squad dared take the objective before your opponent has a chance to score it. With some exalted daemons, you could even survive the reprisal round of shooting, score the point, and limp back behind your original hiding place to do it again next turn.

Third, gunline armies are basically dead in the water with the five round turn limit. They MUST come out to meet you from turn one or two, or you will have an unassailable lead. In ITC, gunline armies do most of their scoring on turns five and six, and BOTH of these rounds don’t really exist in 9th, as primary objectives can only be scored at the start of your turn. Simultaneously, because kills don’t provide primary points, daemon players no longer have to go for suicidal board positions to get kills and are not punished for not being able to get a kill turn one.

Fourth, cover has never really meant anything to Daemon armies, but with the introduction of dense cover, you can get the same -1 to hit protection afforded before to only Nurgle daemons. This drastically improves our durability for essentially free, and we are not really affected by it in return.

Fifth, tri-pointing is mostly dead for elite melee armies due to Desperate Breakout, but our units either never had tri-pointing available (greater daemons) or are so large that tri-pointing multiple units simultaneously isn’t viable. Additionally, flying units cannot fall back and shoot any longer, so getting into combat with them is finally worth it, even if vehicles can still shoot at a -1 to hit.

Next, from looking at several point previews (specifically for Space Marines), it seems that indirect fire weapons (which have been unbelievably under-points-budgeted by GW up to now) are getting a skyrocketing increase in points. Blast weapons AND heavy, multi-shot weapons are getting a similar treatment. For example, twin heavy bolters on vehicles are going from 14 points to 30(!!!), which is an incredible jump. So, the weapons that killed us in droves are going to cost a pretty penny to bring. Will the vehicle meta move players away from these weapons, especially with their insane cost increases? I think so, and that is pretty good for us.

Lastly, morale is HUGELY improved. No longer will you have to spend 2 CP on autopassing morale EVERY SINGLE TURN. Morale has been further reduced to much less of a nuisance than before, and daemon players will feel less bad about risking it all for that 1 on the morale test. It cannot be overstated how much of a buff this is.

Well, we got the good stuff out of the way. What about the bad?

First, blast weapons, even if they are expensive, exist now, and they are extremely good at killing our best units in hordes. Even taking overwatch from one of these weapons will SUPER kill a charging horde. So, how do we get around that? The first way is to ensure that you have tripointed two units on your deep strike charge. If you screw this up, it is likely game over for you, as the blast weapons will hyper-efficiently murder the entire unit. If you must charge these units with blast weapons, be sure to bring a cheap unit to soak the overwatch and make your opponent waste the stratagem.

Secondly, it seems that GW is adding quite a few mechanics to the game to improve the effects of always strikes last. This is a HUGE nerf to Khorne daemons as they are fragile and require being able to go first in the fight phase. However, this does not really affect the other gods as much. Slaanesh armies completely ignore the effect AND “always fights first” actually works for once, making them huge winners in this edition. Tzeentch and Nurgle armies typically try to avoid combat except to multi-tag and wrap lots of units with Plaguebearers, and so don’t really mind fighting last.

Thirdly, hiding in the first floor of ruins is no more. In fact, even slightly touching any terrain other than dense has become a HUGE liability. I do not really have much to say here other than be very careful about positioning. This nerf has no upside for us, but it is work-aroundable.

Fourth, coherency definitely affects all daemon playstyles. Like above, just be very careful and mindful about the positioning and removal of dead models. Use bowtie formations only when necessary or make all of your lines out of triangles. This is annoying, but it isn’t the end of the world.

Fifth, the loss of the supreme command detachment is really rough. My greater daemon army from the end of 8th is no longer REMOTELY legal and will require a lot of rearranging. Luckily, I am used to this army having 0 cp on game start from exalting all the things and only using gaze of fate rerolls. So, I will likely be loading up on Patrols to get the HQ slots I need. This will continue to allow me to exalt 6+ greater daemons, and I do not have many strategems worth using during the game anyway.

So, most of the bad stuff can be worked around. But, what about the horrible stuff? What are the challenges that seem like they cannot simply be overcome?

First, Tau look to be one of the best factions of 9th edition AND are our ultimate counter army. They get an extra round of shooting for free in our charge phase, and overwatch has even been slightly buffed (even non-Tau sept infantry can get the 5+ overwatch with defensible terrain). I have been in the think tank of how to even interact with the typical triple-Riptide + drone screen for weeks, and I still have not come up with a good solution. We have no overwatch removal abilities and can no longer charge out of buildings to ignore it anymore. Hopefully, points changes will REALLY hurt this army. Smart missiles are LOS-ignoring, and so, may see a considerable increase. GW knows about how oppressive Shield Drones are and may errata them to shooting only, hugely inflate their points, or make them work like every other bodyguard unit in the game. I will have to wait and see on this.

Secondly, Abhor the Witch is simply an outrageous secondary mission against us. Three character kills maxes it out, and even Brimstone Horrors give 3 points apiece. This is devastating. Most secondaries are extremely difficult to max and require five turns, in a row, of action, and this one can be picked up in one round easily. I literally could not believe my eyes when I saw it. So, until we see the tournament pack and if this objective makes it in there, you have to assume you are playing 15 VPs down just like Knight players (unless you are mono-Khorne – Blood for the Blood God).

9th edition really rewards the thinking player, more so than ever before. If you expect just to take a tide of bodies and drown your opponent (due to game-wide melee nerfs) or just want to sit back and shoot only (as I talk about in The Good point three above), you will lose over and over and over. A balanced approach is necessary to be able to get primary points in only four game rounds, and secondaries in five.

Daemons have good units for getting VPs quickly and force your opponent’s hand at least in function. After points are released, we will see if they can do this point-efficiently, how point-efficient our counters end up being, or even if the Grand Tournament mission structure ends up being drastically different. Till then, may you drink the blood of your enemies and let their friends’ and families’ cries of anguish sustain you in the physical realm.

Please comment your thoughts below or reach out to the Art of War for questions and potentially coaching services to hit the ground running in 9th.