The history of the last edition was a very mixed bag for Orks. Before stratagems, they started very strong, leading with tons of Weirdboyz and Boyz who would flood the board. This died down with the advent of new codexes, and competitive Orks largely disappeared for some time. There was a resurgence with the codex, which (in my opinion) was one of the better-written rulesets released for a xenos army. Orks remained a popular army, though they lost some shine when the new Space Marines came out, as it was hard to compete with an army that had so many brutal counters to what Orks could provide. 8th edition ended with Orks in kind of a middle place – not a bad army, but one that still struggled to remain at the top tables.

So, where does that leave us with 9th ed? Well – Orks are in a very interesting place, but they remain a competitive army. To understand what to take and why, you need to understand the game theory of the new edition – which means discussing the new tournament rules. 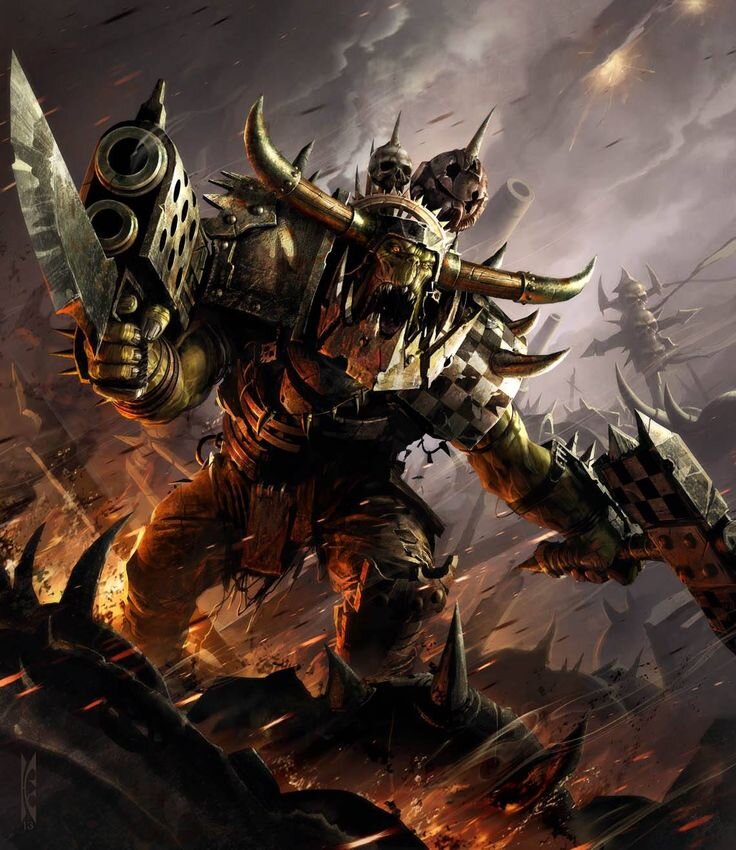 9th edition has two aspects to all of its missions: a primary and a secondary. The secondaries are a complex mix of options that largely revolve around how you individually build your army and what you are playing against. As such, (with a few exceptions), it is hard to build your army to account for secondaries. However, primaries are almost always the same.

Most missions involve three parts: holding a small number of objectives (usually one), holding a larger number of objectives (usually two), and holding more objectives than your opponent. Almost every single competitive mission involves one objective being in your own deployment zone, but the rest are in the middle of the field. Thus, all primary missions are a zero-sum game – unlike ITC missions, only ONE of you two can do well in points. So, you must build to win on Primary missions.

Orks are inherently a board control army, which means that they certainly offer strengths towards this goal – but the way they do it in 9th is very different from 8th. Rather than discussing each unit ad nauseum, let’s discuss the role of various aspects of the Ork army, and why you should – or should not – include them in your army. We will designate these three unit types as either distraction units, destruction units, or persistent units. I will offer some examples of each unit in these categories, but it is out of the scope of this article to discuss in fine detail how each unit can be used. That is a topic for another time. 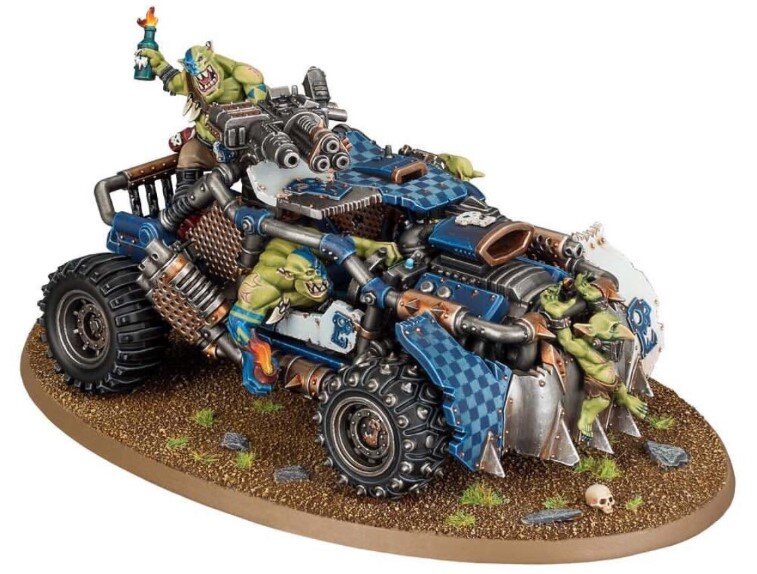 Distraction units are exactly what they sound like – a unit that offers an annoyance against your opponent. These units do not necessarily directly win you the mission. Instead, they exist to prevent your opponent from winning. Distraction units are not a necessary unit for every army, but they do offer utility when included. In 8th edition, a classic example of this would be Gretchin – they were a cheap, annoying unit that would clog up the board, slow your opponent’s movement down, and exist to absorb bullets.

The best distraction units of 9th Orks include Boyz, Kommandos, Stormboyz, Trukks, Deffkoptas, and Burna-bommers. Boyz can be used as ten-man units in a truck to block your opponent’s movement. Their destructive capacity in this regard is irrelevant. Kommandos are cheap units that can show up anywhere on the board to tie things up. Trukks are best used as ballistic missiles. Once they drop off their payloads, they work by charging directly into your opponent’s shooty units to waste their shots. Stormboyz have incredible speed, and with this, they can be used as small units to body block your opponent from moving forward. Deffkoptas have a similar role. Burna-bommers disrupt your opponent’s ability to retain formation due to the risk of mortal wound explosions from flying ‘eadbutt. They also are flyers, with a base that you can use to limit infantry movement.

Destruction units exist purely to kill your opponent. These are far less important in 9th than in 8th, but they still serve a role. While you technically could win 9th missions without killing a single unit, it is inherently in your best interest to include some of these units to remove risks as necessary from the board. Everyone knows the value of killing things. An example of this in 8th would be Lootas, which could double shoot from a fairly safe vantage point to pick up several units from the board.

The best destruction units include Warbosses, Buggies (of all kinds), Tankbustas, Deff Dreads, and Mek Gunz. Warbosses are extremely effective when taken with Da Killa Klaw against all sorts of vehicles, and the ability to fight on death (or to fight twice) makes this incredibly useful against units such as Knights and characters. Buggies – especially the Shokkjump Dragsta – are cheap units that can produce a fair amount of firepower for their cost in 9ed. Tankbustas are better than ever – not only can they outflank for 1 cp, but they exist to kill vehicles, which are an incredibly popular unit archetype in 9ed. Deff Dreads are cheap units that benefit from not only decent shooting (3x kustom mega blastas with Deffskulls), but also a decent ability in melee combat. Almost every Ork player knows the viability of Mek Gunz – the Smasha gun is still ridiculously efficient at killing multi-wound models, and only loses some of its luster against units that are T8 or above. 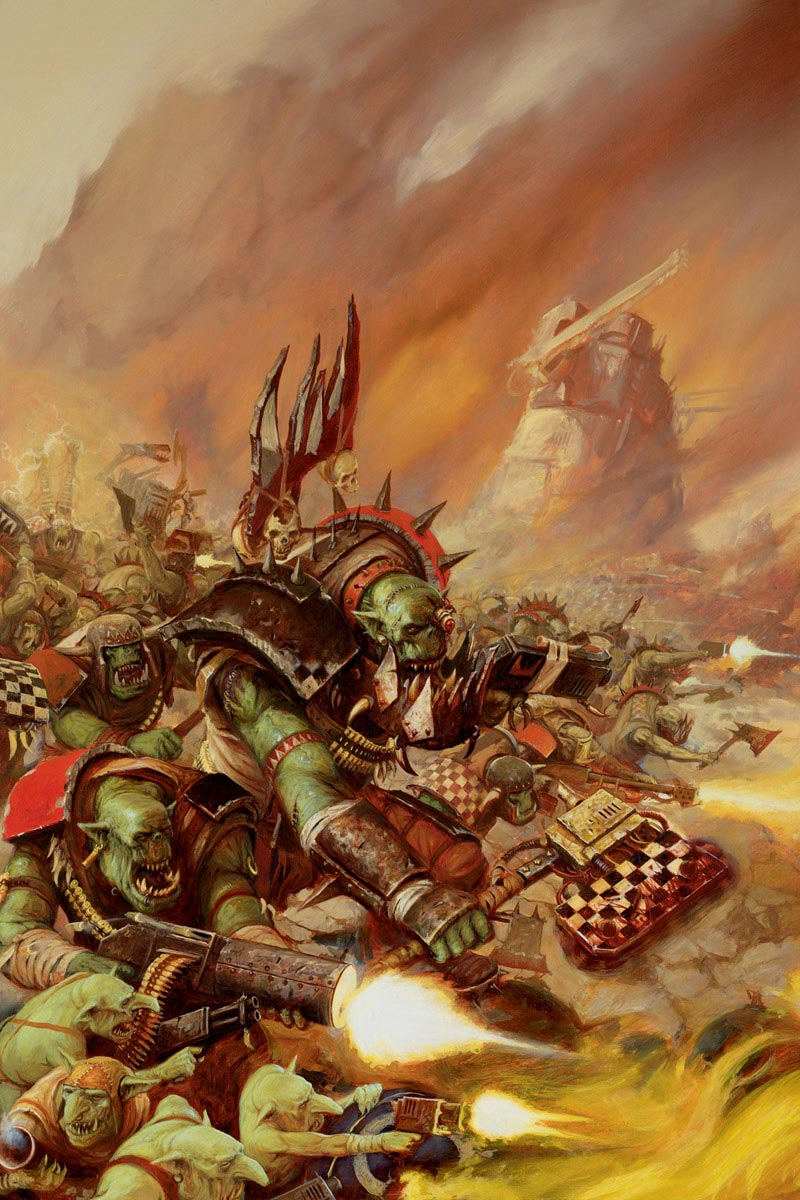 Persistent units exist to merely remain alive. They are easily the most important part of 9th – you need to have units that can not only hold an objective but also be able to survive aggression from your opponent. Any unit can theoretically hold an objective, but unlike in 8ed, you need to hold it for the duration of your opponent’s turn. As a result, it is absolutely vital to have hard to kill units in your army. An example of this in 8th would be a unit like a 30 man blob of Ork boyz with a painboy and a KFF nearby.

Orks only have a few persistent units, but they do the job well: Boy squads, Meganobz, and Ghazghkull. Despite the addition of blast, 30 man boy squads are still an obnoxious unit that (in combination with a KFF or a painboy) can be a difficult unit to remove. Meganobz, especially when taken as Deffskulls, have the benefit of being the only highly armored Ork unit in the game that can get Obsec. Ghazghkull retains his difficulty in being killed in this edition as a result of his “I only take four wounds a phase” rule.

It is worth noting that some units have some carry-over between role types. Meganobz exist mainly as a hard to kill unit, but they are scary in combat when given a chance, and can be used as a persistent unit. Trukks are excellent distraction units, but they can be used as a shield to protect your boy squads, and thus fulfill the role of a persistent unit. Similarly, Buggies (in a pinch) can be used to throw themselves as sacrificial walls in front of your opponent’s armies to slow them down, and as such, can be a decent distraction unit.

It is essential that when you build your Ork army, you consider all of the roles of these units. Too many distraction units means that you may prevent your opponent from winning much on Primary, but you won’t win it either. Too much destruction means you may end up tabling your opponent, but only after he has spent four turns maxing out his Primary. Some armies can do with nothing but persistent units – but an entire army that literally just hopes to not die can be a tedious and ineffective venture. Keep these theories in mind when building a list, and you’ll have much more success.

I hope that you found this article helpful, but it only touches on the surface of competitive Ork armies in 9th edition. There are many more factors to consider: how to build your army, the effective ways to use units and combos, and important considerations against particular opponent types. If you’re interested in discussing it further, feel free to message me in the Art of War group or catch me in one of my clinic sessions. Best of luck to all of my fellow warbosses in the new times ahead. 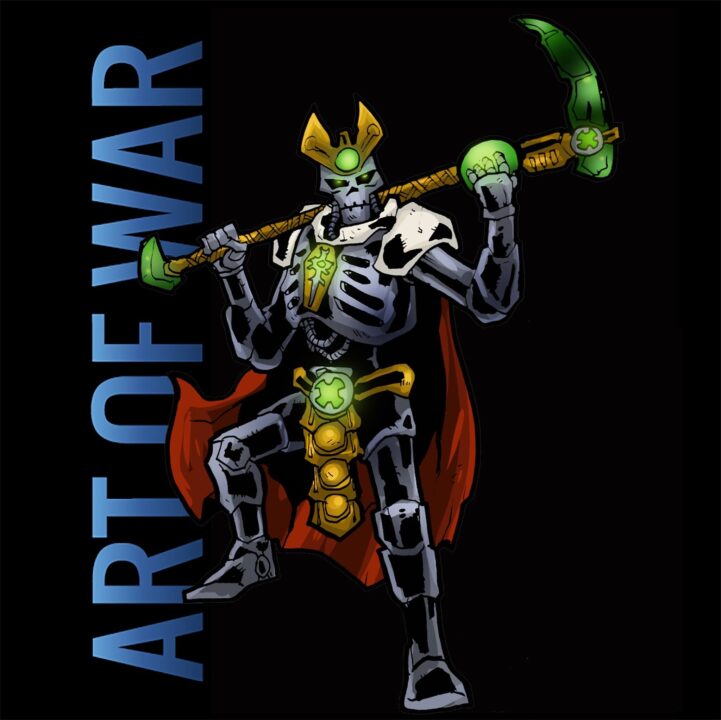