Hey guys, Aron from Art of War here, and today I’m going to be looking at the new Dark Angels Index and how it plays together with the new Space Marine Codex. Now, unless you’ve been living under a rock (bad joke), you would’ve heard that Dark Angels got some powerful new upgrades to some of their most elite choices in Deathwing and slightly less so in Ravenwing.

Additionally, the new Space Marine codex has launched, which, unlike 8th Edition, rolls Dark Angels back into the Marine family fold and unlocks a new abundance of units and combinations, which I think is very exciting and will make for some entertaining lists.

We’re going to take a lens to these new rules, obvious implications, and some ways on how to utilize these fantastic new layers to the army on the table.

Overall the index is a big win, but it comes at a cost. As with the other Index releases (Blood Angels, Space wolves, etc.), until the new supplements for these chapters are released, all the old 8th Edition Codex: Dark Angels stratagems are gone, along with many of the Psychic Awakening ones. The index provides seven stratagems plucked from PA and allows the use of the stratagems found in the New Marine codex.

This does mean some favorites in Weapons of the Dark Age, Speed of the Raven, and Intractable are gone, and it’s unknown if they will return in the supplement. Additionally, all the old codex relics are gone, but some key ones flow through from PA as with stratagems. Plus, we have access to the new Marine Codex relics, so it’s not all bad by any means.

Warlord traits follow the exact same trend. The old Codex ones have been deleted, the PA Deathwing and Ravenwing traits all come through bar Inexorable (more on that in a moment), and the unique Dark Angels warlord trait from the new Space Marine Codex is a refreshed look on Brilliant Strategist. Allowing you to pick any Dark Angels unit within 6” of your warlord in the command phase is excellent. That unit can roll back to the previous doctrine, depending on which is currently active. This isn’t restricted to <Core>, so it has some great applications.

So far, this seems all fairly vanilla with nothing rock shattering, so let’s go into some of the ability changes that fundamentally shift the potency of the two unique wings within Dark Angels.

PA brought some generous stratagem support for Ravenwing in the form of being able to switch on jink for a unit to get that all-important 4++ save against ranged shooting. Even the feared stratagem for a Ravenwing bike unit to teleport in Deathwing units into very uncomfortable ranges is back. Thankfully these stratagems carry through, and some of the new ability changes to Deathwing (soon, it’s coming) can create incredibly painful and hard-to-shift problems for your opponent.

A key index ability change here is around jink. Now all units with this ability have a 5++ against ranged attacks and only lose this if they remain stationary in your movement phase. This is a game-changer in terms of going second. No longer are your Ravenwing immediately exposed because they haven’t had the chance to advance or needing to immediately drop CP to activate jink. Jink also continues to provide a 4++ against ranged attacks if you advance in your movement phase.

Undoubtedly the big Ravenwing unit that comes out on top is the Ravenwing Talonmaster. Not only did this staple unit go down in points to 160, gain the benefit of the heavy bolter damage increase, go up to 8 wounds, but it incredibly also benefits from the Company of Heroes ability, which allows you to add a second lieutenant (which a Talonmaster is) and not take up an HQ slot!

It’s worth touching on the often forgotten Ravenwing Champion. He’s had a points reduction down to 70pts, he has the Company Champion keyword allowing upgrade into the Chapter Champion, and he unlocks the option to give him reroll charges for your characters and core units. He’s also a prime candidate to hold the Ravenwing exclusive relic for -1 to invul saves to enemy units within 3”, along with the other Ravenwing specific stratagems previously mentioned, there is a considerable amount of tactical flexibility a unit like this can bring to your list.

Strap yourselves in because this is where we start to dip our toes into some potentially obscene territory.

Let’s talk about Inner Circle. In 8th Edition, Inner Circle provided units with this ability automatically passed morale tests and reroll failed hits in the fight phase vs Fallen. In the grand scheme, it did not provide any significant benefits.

The reworked Inner Circle still provides automatically passing morale tests (now low key amazing with the new Oaths of Moment secondary available via the new Marine Codex), but also when falling back (unless you are a vehicle, Ravenwing, or Chapter Master unit), you must roll 2d6 and score equal or lower to your leadership to be able to fall back (can’t fallback ever vs non-vehicle Fallen units). The final bit that Inner Circle grants is each time an attack is made against an infantry unit with this keyword, an unmodified wound roll of 1-3 always fails. We are talking about permanent Transhuman for Deathwing Terminators, Knights, DW Command Squads, infantry characters with inner circle keyword (Azrael, for example).

The important thing to note at this point is that right now, the only units that have Inner Circle keywords can be found in the Dark Angels Index, which means units like the Bladeguard Vets found the Space Marine codex, while granted the Deathwing keyword in the new Codex, are not also given the Inner Circle keyword (I would assume this will be updated either by FAQ or when the supplement launches).

It doesn’t stop here either. If always on Transhuman wasn’t enough, the Deathwing Command Squads (unit size 2-5) picked up a brilliant little ability called Bodyguard. This means that any Dark Angels character within 3” of a DW Command Squad cannot be targeted with a ranged attack regardless if the character is closer to the firing unit or if the firing unit ignores the lookout sir rule. This rule’s implications are enormous, and the character protection that can be provided by 3-wound, Transhuman, Deathwing models with Storm Shields cannot be overstated.

Ok, so we’ve touched on the new rules. Now the fun part is how to piece it all together, make a list that scores points, and win games.

Dark Angels have recently been a bit of a basket case, these flavorsome and unique wings that want to work together but cost a bit much for what you are actually getting on the table. That hasn’t massively changed, but the ability to take a large chunk and sprinkle in some units for various wings with these new overlapping buffs, stratagems, and relics can create a real problem for your opponent to deal with.

A significant change for Azrael is his 6” aura of 4++. No longer is it granted in combat. Still, not all is lost. It now works on infantry and biker units within 6” rather than models within 6”, has the new Chapter Master rules, and gives +2cp as a warlord. His weapon’s plasma is master crafted, so it’s always S8 2dmg with no exploding possible. He also has Inner Circle, so he always has Transhuman activated. This provides any list a legitimate core unit to build around.

Apothecaries, in general, are now amazing in so many different ways. A 6+++ for infantry and biker units and access to a 1cp stratagem (free with appropriate Chief Apothecary upgrades) to bring back an infantry or biker model at full wounds are an auto-include. Plus, a Ravenwing Apothecary can go from one part of the battlefield to the other (up to 34” with Full Throttle stratagem) to provide medical care is frankly obscene.

Ancients are solid, specifically the Bladeguard Ancient (which gains the Deathwing keyword and the ability to take the 5+++ FNP banner for Deathwing infantry), especially with the new Space Marine warlord trait Rites of War that provides chapter core and character models with objective secured. The ability to fire/fight in death for units within 6” is also still great value.

With some of these fantastic buffing cornerstone units, we then look at layering in blocks of Deathwing Terminators to benefit from 4++ against shooting, 5+++ fnp, Obsec, Models being brought back, and, of course, always on Transhuman. There are a multitude of ways to look at this, from large units to 5-man units dropping in via bikes to critical parts of the board and utilizing combat squads where required.

You can build a strong core for 1400-1500 points and have the rest looking at different tech options depending on your local meta. Obviously, Eradicators come into the conversation and are realistically an auto-pick. But also consider what that core block does for, say, Assault Hellblasters. Three shots each at str6 -4 AP 1D is a large volume of fire. A majority of the armor in the game there isn’t getting a save, it’s wounding reliably, Chapter Master rerolls are available, the new DA chapter tactic for +1 to hit if you didn’t move, and the ability to still spike it to 2 damage through overcharge can be very strong. 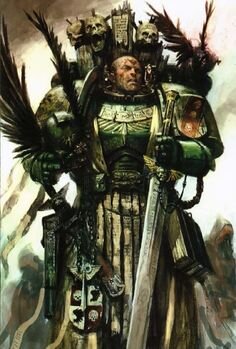 Here’s an example of a list that takes advantage of these new mechanics:

Finally, let’s score some points. The new Space Marine Secondary Oaths of Moment, which falls into the No Mercy, No respite category, synergize very well with the new Dark Angels look. There are 4 points offered each turn: 1 point for not falling back or failing a morale test, 1 point for killing a character, monster, or vehicle, and 2 points for having a unit wholly within 6” of the center of the board. With incredibly hard to shift Deathwing units (that are immune to moral) and layers of defensive buffs, 3 points per turn is more than feasible.

Having access to Chapter Ancient upgrades and warlord traits that grant units who previously did not have objective secure is a huge boon for an army that wants to lean so heavily into elite and fast attack choices. Black Knights (now 3 wounds), for example, supported with a Ravenwing Ancient upgraded to Chapter Ancient, can easily swoop in and hold key objectives, then benefit from jink and the new skilled riders stratagem to gain -1 to hit.

Depending on the build of your list, secondary choices that don’t require you to specifically interact with your opponent are incredibly strong. Oaths, Raise Banners, and some GT mission secondaries are all healthy options for a resilient Deathwing backbone.

I hope this article on some of the fundamentals and updates to Dark Angels has been insightful. If you’d like to find out more about using the army’s technical side and list building specifics, please check out The War Room and The Art of War coaching services.

Hi everyone, Aron from Art of War, and today we are taking a peek into the new rules supplement for everybody’s favorite and unequaled savage…